During lockdown, Linden and I participated in a Sci-Fi as Activism writing course, convened by Ama Josephine Budge, and hosted by Freeword as part of their Finding Power in Isolation season. We got so much from being part of this amazing group of writers and activists, and from Ama's inspiring teaching. This moment, more than ever, is the time to get to work on imagining and creating different worlds, filling our carrier bags with creativity, ingenuity, wild abandon, love and rage.

Below is an excerpt from a story I wrote during the course inspired by an underground leak, and all of the earthlings who are working to transform, compost, break down and reroute oppressive power structures.

A rewop leak had been detected in the upper west region of Alansika and Min was on root to attend to it. Her trailer was filled with handcrafted sections of pipe, joints of every imaginable angle, a small solar digger, various resins and expanding glue. Her belt hung heavy with tools of the trade; these had evolved alongside the mutation of the cities plumbing system, and included grafting secateurs, a small mattock, sewing kit, saws of all sizes, wrench, drill, flow monitoring probes, various twines and tapes (because ducktape was still the answer to many of life’s problems).

As she sped through the early morning rhizosphere, the silhouette of the city pipes loomed high, threading their way through towers and monuments, like glittering tentacles. They oscillated in the morning breeze, always reaching for new territory, connecting everything and everyone, whether they liked it or not.

Min leaned back in her seat, and allowed her head to flop to one side, making the world around her appear even more off kilter than it was already. She stuck her tongue out through uneven denticles to taste the morning air. Even in these topsy turvy times, Min found pleasure in these small moments, this was her medicine.

As Min got nearer to the leak, she began to feel a deep sadness rising from her gut. Rewop leaks affected everyone differently, but with a shared intensity. Min slurped some rewop tincture from a straw which sprouted from her overalls. Sometimes she felt like an assemblage of pipes too, this thought warmed her, and she felt it in her veins as the tincture moved into her bloodstream. On arriving at the site of the leak Min felt the sadness rise to her throat and form a sharp lump (sometimes it felt like she was drowning in grief, but knew now that it would eventually pass, like a wave). People stood around in groups or alone, lost in their emotions. The leak felt like a thick blanket which weighed down on everyone, some people raged, wriggled and fought with it and each other, whilst others became still, and quiet and stuck. There was violence, shame, fear, and anger in the air, which could be felt as a kind of electricity, accompanied by the unmistakable smell of putrescine which emanated from a severed tangle of pipes which rose from the ground.

A figure wearing a peculiar outfit that resembled a leather-like shield kneeled over the pipes. Strapped to ~ back were three tanks filled with fluids of different browns which ~ proceeded to pump into the broken pipe-rhizome, using a tentacular contraption Min had not seen before. Feeling heavy with grief, Min tried to mobilise herself to get to the pipes and stem the leak. As she got close to the shielded figure she became aware of ~ scent. A sweet smell of leafmould and fermenting things, which mingled with the putrescine in a way which enabled Min to speak. “I’m here to fix the leak” she said, in a husky tone. The interloper looked up from ~ work, quickly clocking the uniform and tool belt. “Great! so am I… sort of, almost done here, so will let you get on.” With a pipette, and before Min could say anything, the figure released 3 drops of red fluid from a bottle, tucked in ~ shoe. “what are you doing?” “Just trying something, an innoculant, we’ve been working on in the zome where we come from, it’s a bit complicated to explain right now, and you have a leak to fix, so don’t mind us” This intriguing creature withdrew ~ pipette, pump and hose pipes like a jelly fish, contracting and drifting away. Min was always curious to meet other radicle plumbers, especially those more radicle than herself, even if they were breaking the rules. 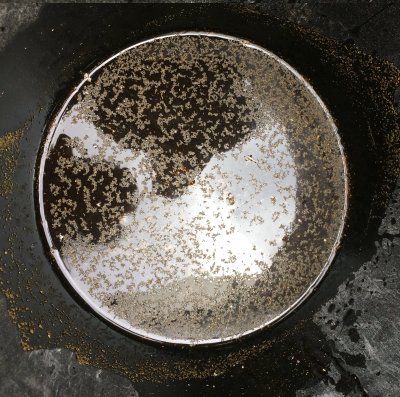